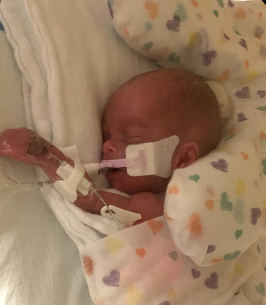 Cooper Reid Kowalski passed away peacefully in his mother’s arms surrounded by his father and loving family on December 16, 2021 at two weeks old. Even though he was only in this world for a short time he made an impact that people try to make in a lifetime. Cooper spent his short life kicking and pulling at things, he was such a fighter till the end. He shocked everybody with his strength, for his size and made everybody smile when they saw him. Even though he didn’t know what was going on for the entirety of his life he was a smart baby and somehow knew he was making a difference in peoples lives, family or not. He was a special little boy and will be forever missed, forever loved and never forgotten by anyone.

Coopers family cherishes his memory as the brief gift that it was. Cooper Reid is survived by his Parents, Brandon Kowalski and Julia Incammicia and his Grandparents Joseph and Dorine Incammicia, Kelly Calamusa and Christopher Kowalski. He is also survived by his Great Grandmothers Linda Connors and Mary Incammicia along with his Aunts and Uncles Emily Incammicia, Kirsten and Tristan Kowalski and Kyle Collins. He will be watching over his parents and future siblings making sure they’re ok and making sure everybody knows he is free now and not in pain anymore.

All rights reserved. This obituary is also archived at obittree.com